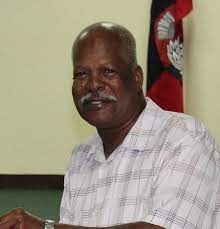 A number of police ranks recently promoted ought not to have been, says Retired Assistant Police Commissioner, Clinton Conway.
Conway in a letter today, said he does not believe proper vetting was done of ranks promoted. He is also of the opinion, that the Police Service Commission headed by Patrick Finley did not have enough time to look at individual files of ranks. The vetting of files would say if those nominated for promotion had disciplinary or other matters pending investigation; those who passed the Appropriate Qualifying Examinations, seniority, education qualification, merit and ability, together with efficiency and experience; and to be guided by the principles of selection for promotion imbedded in the Public Service Commission Rules that are enshrined in Article 29 ( 1 – 3 ) of the Constitution.
He explained that a quick look at the promotion lists revealed that several of the senior officers promoted have disciplinary and other matters pending against them. Additionally, several supersessions without justifications took place; that of the twenty-one officers elevated to superintendents, fifteen were assistant superintendents while one was an inspector, which was described as unprecedented; one sergeant who did not write the Appropriate Qualifying Examination was promoted to assistant superintendent and that several other promoted ranks did not pass or did not write the Appropriate Qualifying Examination.
He added that Sergeant Dameion Mc Lennon who was promoted to the rank of Cadet officer and under investigation concerning the shooting death of Quindon Bacchus will be facing the Court on a criminal charge of attempt to obstruct the course of justice.
This Conway said indicates that proper vetting of the promotion list was not done before it was sent to the Police Service Commission for approval.
Concerning Sergeant McLennon, the communications department of the Police Force in a press statement on Monday refuted allegations that McLennon was promoted for inappropriate conduct.
According to the press statement, the circumstances relating to McLennon did not initially reveal that he might have been implicated in the perpetration of any crime of misconduct. This has to do with the operation at Haslington, East Coast Demerara that resulted in the death of 25-year-old Quindon Bacchus. Further, nothing was incriminating in his personnel files to affect consideration for promotion, and the vetting process and subsequent promotion were concluded before the legal advice was received from the Director of Public Prosecutions on July 4.
The DPP recommended that McLennon and Lance Corporal Thurston Simon be charged with obstructing the course of justice. At the same time, McLennon faced an additional charge of conduct prejudice to good order and discipline in relation to the shooting of Quindon Bacchus on June 10. Another officer, Kristoff DeNobrega involved in the matter faces a charge of murder. The three are all members of the special branch unit of the Police Force.

Watts, Brutus and Blanhum among 8 promoted to Assistant Police Commissioners